The Disapprovers - Round Rover

"... anybunny got a smoke? A cigar would do." asked Zeus as he prepared the round 'rover' for deployment. He didn't look thrilled and I felt that he did look like he really could eat a cigar; just to take the edge off, you know.
"No, sorry Zeus." I mumbled, trying to clear my throat at the same time. The thought burned and scratched my throat, I swear I could smell the nasty cigar smoke come out of my nose. What was going on?!? 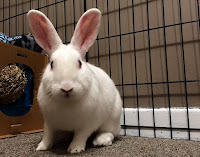 Zeus didn't mind any of us, he knew we would not help.
He turned to me and said, "Here, Major, hold this." and directed me to put my paws on the small, orange ball. It looked like a ball, except that it was a little flattened. I helped it stay upright with the flat spots perpendicular to the ground. I hoped to see some lights flash, or to hear some cool noises out of this thing, but no luck. Zeus just kept fiddling with his tablet, programing the rover.
The orange ball split open and its side separated, revealing a smaller ball inside it, mounted on an axle connecting both 'wheels'. I imagine it had to have an "eye" or "eyes", but I could not tell where or how many camera lenses were hiding there. The centerpiece was black and glossy, reflecting the rolling clouds of fog.
The fog thickened significantly and we could barely see the house now. It was still very dark, but I wondered how much time we had left before we'd have to head back.
Suddenly, the rover was done running its self checks and the 'wheels' retracted, returning the rover to flatten ball form. We were all getting a little anxious now. 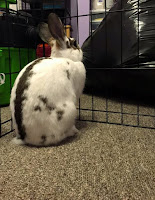 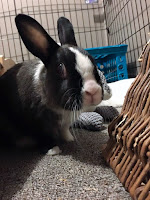 Molly and Zeus rolled the rover ball toward the tunnel.
"Zeus, wait!" yelled Molly. Zeus stopped and looked at her, "Now what?!?"
"Move to the side, will ya?", said Molly as she took the rover, lined it up with the tunnel opening and steadied it. She started narrating herself, "... and here goes VanMolly, free kick for Bunnchester United; she's getting ready...".
She got close to the rover and turned with her back to it. She checked the alignment between her, the rover and tunnel opening. She shifted a bit to the left.
"... and she shoots!" Molly kissed the rover with a gentle thump of her hind paw and the rover rolled steadily toward the tunnel. The rover went in and picked up a little more speed, disappearing out of sight and rolling all the way to the the end.
"Goaaaaaaaaaaaaaal! Goaaaaaaaaaal!", yelled Molly, she did binky after binky, jumped on top of Abby hugging her and slid over her head falling to the ground with a roll. Then she made a victory loop and tried to high-five Zeus, almost knocking him over.
We, ... we weren't sure what's had gotten into her. It was all Molly though.
"Oh, come on you sticklers, I'm getting really cold, had to move around to warm up." pleaded Molly.
One minute you think you know somebunny and then you're meeting them for the first time all over again. I liked it, I just wasn't sure if I was supposed to like it.
"What was that? You know we can't see much here right now." asked Suzy. 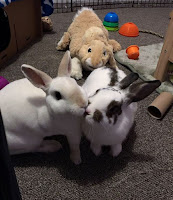 "Oh nothing, Molly's warming up, the final push you know, we're about to deploy the rover." radioed Abby with a grin.
"Let's go!" growled Zeus and turned for the tunnel. Molly followed him.
When they got to the end, they positioned the rover and placed their paws around it on the "loofa" itself, hoping it would respond with an opening. They waited for a few seconds, but nothing happened.
"You think it knows?" asked Molly.
"It knows what? I've no idea. We'll have to wait and hope for the best." answered Zeus.
Finally the loofa responded and started opening and as it did, the rover ball started to slide into the opening. Molly tried to push it down with her chin and it finally dropped in. Zeus removed the old, cut off probe cable. They moved their paws away and watched the opening close. Molly caught a glimpse of the dismembered olive probe at the bottom of the "loofa".
She backed out of the tunnel as fast as she could and Zeus followed her. We gathered around the tablet to see if the rover would again come to life and respond to instructions. Molly decided to keep moving around and volunteered to be on the lookout.
The rover indeed responded as expected. Once its wheels separated and the center body stabilized, we saw a tiled panorama of the "loofa"'s insides.
"Can we see where that little opossum came from?" asked Suzy.
"Sure, why not." answered Zeus. 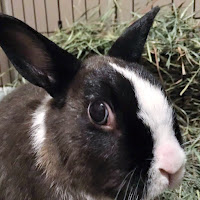 I have pretty much no clue of what is going on except it is a continuing cliff-hanger saga of bunn entrepitude and creativity.

Wait, rats eat cigars?! I had no idea! Time for a bunny football (soccer) league; can't you just see them leaping and binkying around the goal? Molly would be first to sign up! :)=
-Jen (Kohl's mom)