Pancake launched toward Freddie before he could react. As she flew by the console, she grabbed the paw rail and bounced Freddie with her backside. A split second later, she grabbed him by the collar of his flight suit, saving him from flying off and slamming into the bulkhead. He got a little whiplash, but at least he had Pancake's undivided attention.
"Well, what is it?" growled Pancake, still holding Freddie by the collar. Stunned, he frantically pointed at the console. Pancake read and slowly released her grip on Freddie. She read the transcript of the SOS message, slowly whispering to herself what she read as if afraid to miss a word. 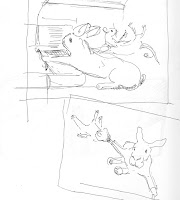 Pancake and Freddie
"And you really think this came from Toes and his guys? To me, it smells like a prank," said Pancake, still agitated.
"Should we tell Abby and the others?" asked Freddie.
"I wouldn't. Not until we can be sure this is Toes. Abby's been through a lot now. I would hate to raise her hopes like that, only to crush them when this turns out to be rubbish. I mean, there's been no official word hinting at all that any survivors got picked up. If they did pick up anybun, any survivors, that would be front-page news, don't you think?" Pancake wondered as her voice became calmer.
As Pancake relaxed a bit and started to second guess herself, Freddie started to look around for any trace evidence of what could corroborate his survivor hypothesis. At first, he found nothing unusual pointing to any rescue activities. There were rescue vessels in the sector where the mystery ship appeared, but that was just the standard operating procedure. He saw the maintenance ship that was first to volunteer to proceed to the emergency location, but then it canceled that route and resumed its originally planned course. 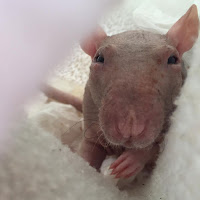 Freddie turned away from the monitor without saying anything and fixed his gaze on the sippy bag he tossed at Pancake. He folded his little paws on his chest and became still. The empty sippy bag was now stuck on an air intake filter. The air made a quiet hissing sound as the bag obstructed the airflow and it made Freddie think of a clepsydra metering the time running out. After a while, he asked, without looking at Pancake, "Where would you take the survivors of an encounter with something extraterrestrial?"
She thought about it for a long moment. "I hate to say it, but I'd try to isolate them from the general population. I don't know; I'd take them to St. Cinnamon's on high orbit—you know, that emergency station. Pancake and Freddie looked at each other. Freddie turned back to the console and tried to access the activity logs on St. Cinnamon's. As a senior maintenance engineer, he had the clearance to access such delicacies as the telemetry of automated maintenance systems on orbit and the ground talking to each other. But, this time, to his surprise, he couldn't. His access was revoked, and the place was locked down. "Ooooh, that's good," Freddie muttered under his nose. Pancake was transfixed. Next, Freddie logged into the ground facilities and discovered that they stopped receiving data from St. Cinnamon's at about the same time the SOS message stopped transmitting. Freddie thought this was good news because something was up and bad news because something was up. After a prolonged hesitation, Freddie said, "Don't judge me," and logged into the ground maintenance system as the Emergency Operations Director. But, most of the logs were empty. Finally, after looking around some more, he found one with an entry about three isolation pods getting activated. The pods usually got activated only when there was a threat of a contagion or during training exercises, and then they all got activated and tested. Freddie tapped the log entries on the screen, "That doesn't happen during drills; they wouldn't test just three of the pods!"
"I tell you what, Pancake; don't say anything to the others. I need to catch a ride to the surface. Let's declare a malfunction, and I can find a ride down at the next repair hub." 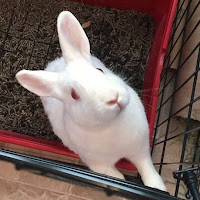 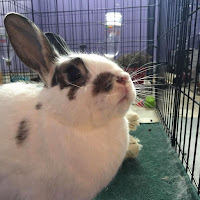 Molly
Freddie got on the radio with the Flight Center and requested docking with the repair station, mumbling something about hydraulics, then something about the main seal in the secondary airlock leaking. The Center had so much on its paws, it couldn't care less right now and cleared the Buzzard to proceed as requested.
"Hmm...I wish I hadn't logged into maintenance from here!" grumbled Freddie to no-bun in particular. His forehead wrinkled, and his mouf froze in a contorted, disapproving grimace. 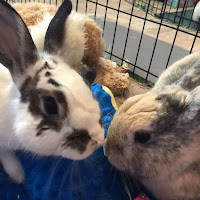 Pancake and Molly
The Buzzard lurched and shook a little after Freddie had programmed the ship's autopilot and the vessel had begun to change its course. Abby flew onto the flight deck, still sleepy, feeling a bit disoriented, and asked, "Why are we changing course?" Molly flew in right behind her, looking just as confused.
"I need to get off as soon as possible," said Freddie. Abby looked at him, then at Pancake. Pancake repeated the story about the leaky airlock and Freddie's needing a ride down. Abby didn't buy any of that and demanded a straight answer. Freddie relented eventually and walked her through his discoveries. Abby turned from being sleepy and groggy to upset. She swung around, pushed off from a paw rail, and left the flight deck without saying a word.

Mr. Toes
***
In the meantime, I checked into my isolation pod. First, I got a regular post-re-entry checkup. The horribly ironic thing was, I seriously doubted there would ever be a re-entry for me. I started on a battery of medical tests. I swallowed two tiny bio-monitors and got an injection of nano-diagnostic solution. This stuff would filter through my body and collect data from within me, down to the molecular level. Afterward, it would be compared with my DNA samples on file.
I hated the cognitive exercises they made me do next. I empathized with the staff, and I knew they had to make me do them, but I couldn't care anymore. Then I got to enjoy a seemingly endless debriefing. When I finally returned to my pod, I was exhausted. Gravity was slowly building up, and for the first time in what felt like an eternity, I could settle into my sleep burrow without having to get myself tied down. As I started to settle into slumber, a dark and sticky wave of sadness closed over me. I missed the arthropods I could have met just a day ago.
Credits:
- Renee: taking care of critters, photography
- Mr. Bun, Ijon Thichy The Nth: story
- Mrs. Angie: editing

Follow the Characters of X Plus Bun on FB
On Instagram @dollyalittledisabledrabbit
Visit our About X Plus Bun page to learn more about the cast members and catch up on other stories!
Posted by Mister Bun at 6:33 AM