No bun slept much that night, even poor Hopper. We stuck out our heads from the burrow-bags and looked at bun another. No bun wanted to be the first bun out. I broke the stalemate. "Mel, breakfast! Hopper, you and me, suit prep!" The hopping orders were out. I caught four stink eyes for it. I crawled out first and stretched. Mel grumbled off to prep food. Hopper and I grabbed a couple of sippy bags and floated toward the flight deck for a quick check of the ship. All readings came back nominal. I missed this place so much already, and I felt like I could come undone at any moment. I thought that if our plan worked and I got to go home in one piece, I'll be going off into the woods for a very long time. 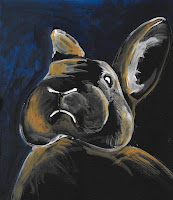 Hopper
We started inspecting the suits when Mel called that the food was ready. I did feel hungry, and I took it as a good sign. We began with a little bit of recovery food mix, then had reconstituted fresh grass and a load of hay. We finished with a little more recovery food mix. No bun said much. The sleepless nights had piled up, and our nerves were strained. The morbid bubble of silence was growing around us. We've reached a point where we simply wanted to get on with whatever lay ahead. I did my best not to make any cracks about the "last breakfast" or other jokes of such ilk.
"OK, everybun, the last call for the litter bin!" called out Hopper. We took our turns and then turned our attention to the departure checklist. Just as we called out the last item on the list, another orbital sunrise flooded our cabin to greet us.
This time, the suit-up went without a hitch. Hopper was steadfast, professional, and went about the routine like an old paw. He didn't rush; he didn't hesitate. Neither did Mel. Stoic professionalism was our only defense against the numbing uncertainty.
After the helmets had been put on and final pressure checks were done, we headed for the airlock. We had commenced our final Extra Bunnicular Activity from our training craft. Once we entered the Behemoth, Mel remotely initiated the orbit adjustment of our craft. We wanted it raised above the Behemoth and definitely above and away from its deadly rear. Just in case, we didn't want the Behemoth blasting away our little vessel when we leave here. Our little trainer needed to be on its way to Saturn in a few hours. If our plan didn't work and we had to come back, we wanted to see that little craft waiting for us where we left it. Then, we would have to make the best of our terrible "Plan B." Ferns and arthropods would have to do. I wouldn't mind it so much if I could write a book about it, "Mr. Toes and the Arthropods," but who would read it?

Mel
I had my paw on the wall of the corridor and briefly felt it vibrate as the orbital maneuvering thrusters of our trainer outside fired. For a moment, we went back outside to visually confirm our craft moved away. Indeed, as we had hoped, it floated safely far away above us.
We were all tethered for this part of our excursion, and we had our auxiliary life-support module and the flight recorders in tow. It was a slow and awkward journey to the command center of the Behemoth. At last, once we got there, all seemed undisturbed since yesterday. We left our cargo in the corridor and proceeded to the three formations.
I grabbed Hopper and Mel by the sleeves of their suits and asked them if they were still good to go through with this experiment. Both said, "Yes."
The central celestial formation, glowing faintly, was analogous to our current location in time-space. Hopper got close to it and took hold of it with both paws. It felt surprisingly solid, as if encased in a transparent, hard substance. He compressed it with both paws and continued to compress and shrink the object until it was tiny and finally disappeared. 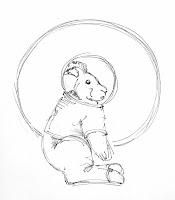 In the corridor
Mel took to the object on our right, the model of our destination, and reduced it to the size of a strawberry that fit in his paw. We all moved over to the model representing our time-space of origin. We hovered, watching it. Mel was supposed to place the destination model right in the middle of our origin to execute the new coordinates command.
"Mel, we're ready when you are. Do you want me to do it?" I asked, nudging him.
He placed his strawberry-sized pebble in the middle of the large model, pressed on it, and floated back a little.
At first, nothing happened. I felt a quick squeeze in my gut, but otherwise, I was fine. I looked at Hopper, but he was still looking at the model. Then, our lights flickered briefly. The chamber gave off a pulse of faint light and returned to its murky self. My suit went dead again, just like the other day when the Behemoth flash-synced with us. I calmly cycled the suit, and it came back on after a while. I saw the lights of Mel's and Hopper's suits come back on too. 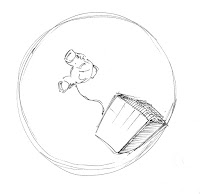 Mel's paw if he was a cartoon
"Well, here we go again, Major," said Hopper, looking at me.
"Now what?" wondered Mel. I think we all knew the answer to that. My feet and ears got flushed.
"Look at this!" I said, tapping Mel's visor. His location coordinates were turning green. At first, I thought that maybe this was just his suit still trying to run self-tests, but mine started doing the same thing. Just how good a sign was this?
"Gentlebuns, turn on your location transmitters, please," I said trying to keep my voice low. The little red indicator lights began to blink lazily.
"The Behemoth might still be shielding our signal. Let's move toward the exit," I commanded.
As we moved back through the corridor toward the airlock, my radio started to crackle, and the time display flickered and turned green, showing a proper date. I saw Mel up ahead. He turned toward me and gave two thumbs up.
"Hurry up, Hopper, will you!" I yelled, laughing. Hopper was leading the way, and he couldn't move fast enough for my taste! We were picking up a lot of frantic radio traffic as if something had happened out there. Oh, wait. Indeed, we had happened. The external signal was getting clearer and clearer. Once we'd got to the airlock and Hopper had pulled it open, we went outside. Our training craft was gone. We were looking out at open space, and we were illuminated by the sun in its harsh, unfiltered glory. The Center frequency was abuzz with activity. Somebun was announcing the loss of contact with a small training craft, then somebun was yelling that the craft was gone altogether. I looked at my emergency transmitter. It was transmitting OK, but was any bunny listening?

Mr. Toes
"Center, this is TR Regis 3, requesting assistance; three survivors," I announced on the emergency frequency. No bun responded. I kept repeating the message, but all was quiet. Then the Center announced they were picking up emergency locator signals and asked who could proceed to the given location. Some maintenance craft responded and said they were proceeding to investigate. They had just launched and were in the best position to rendezvous with us. But no bun had acknowledged my calls yet.
"Major, I'm ready to start cursing, do you think they'll notice?" asked Hopper, sounding aggravated.
Credits:
- Renee: taking care of critters, photography
- Mr. Bun, Ijon Thichy The Nth: story
- Mrs. Angie: editing