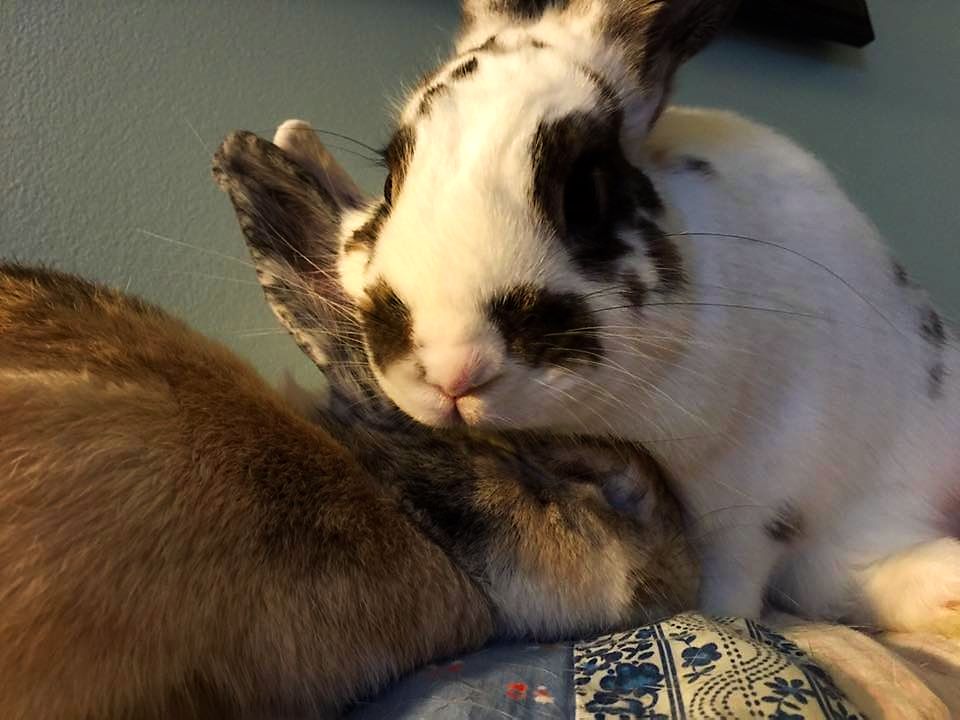 No bun paid much attention when the old satellite in the geostationary orbit got its brains scrambled and stopped transmitting data for a short while. Nerdbuns argued vociferously about the cause of the outage, starting with the sun and ending with the satellite by blaming it for being old. That's where this glitch should have ended. Instead, we all paid attention when the Center lost contact with the crew of our own Mr. Toes' ship. Everybun's temperature jumped. He took a couple of FNBs (Frowning New Buns) on a simple flight, right after they got certificated for flight. A short communications outage, although unusual, never created much cause for concern, but we didn't just lose telemetry and stuff like that; we lost the craft, without a trace. Shortly after, near panic broke out when we noticed that a massive object of unknown origin had parked itself in a geostationary orbit and was doing absolutely nothing. 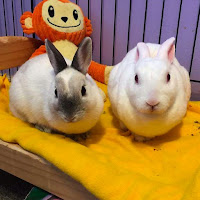 Penny & Ava
We started reconstructing what had happened when an engineering intern drew a straight line from the object to the spot where Toes' craft should have been and through to the satellite. One theory suggested that, when the foreign vessel maneuvered to enter the orbit and fired its retro booster of some sort, that blast had taken out Major Toes and his young crew. That could also explain the interruption in communications with the old satellite. It is an unlikely possibility, but for now, that's all we have.
This is Pancake and Molly. We found this journal when we were cleaning out Toes's quarters. Abby couldn't handle it. She tried to do it all by herself, but it was too much for her. We had no idea he was keeping a journal. To honor him, we have decided to try to keep it going.
Right now, the Buzzard is floating near the spot where we lost Toes. If you know exactly where to look, in the distance, you can see the foreign vessel surrounded by our machines, buzzing with scientists, trying to figure out what it is. 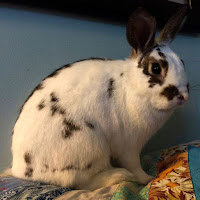 Molly
We are keeping away from all the hubbub in that place. Our immediate task was securing the area of Toe's last known position as a scene of an accident. That's exactly what we've done. Then, we called the Center and requested additional time to deal with an "unexpected maintenance" of one of the cooling units.
They didn't question our request. Freddie was to thank for crafting the message. Now, Freddie and Eva are pre-breathing pure oxygen and getting ready for an EBA. Penny is helping them suit up. How Freddie managed to both take sick time from the machine shop and list himself on this flight is one we'll never know, and it's probably better that way. 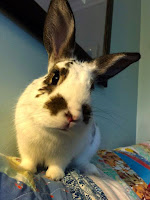 Molly
We have put together a wreath for Mr. Toes, and we are hoping to place it outside, in the void, where we think, he disappeared. The simple wreath is made of hay, twisted into a ring; whole carrots are wrapped around it, and the whole thing is being held together by long, thin willow twigs. Freddie and Bruno insisted we add Toes' old flight suit to it. We rolled it up and tied it in the middle. The whole thing looks a bit odd, but then again, we were, and still are, an odd crew.
Abby and I are sitting up front, staring into the infinite blackness just beyond the pane of a unshielded window made of a glass-like substance. Abby is tapping her paw on the console and keeps staring out into space. We have said nothing to one another beyond what's required to fly this ship. 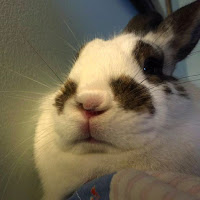 Molly
When we arrived here, we tried to detect any particle traces of what happened. If Toes was blasted away, we should be able to find remnants of the craft, maybe residual background energy. However, we found nothing, literally nothing. There were no signs of radium, titanium, or carbon. The space we searched was devoid of any atoms of helium or hydrogen. You know, the atom or two of helium that your can normally find in a cubic meter of space was nowhere to be found. It looked as if the retrofire from the mystery ship had created a laboratory-style, perfect vacuum. Never mind that we couldn't find debris; this whole area appeared to be have been returned to its pre-big bang, virgin state.

Mr. Toes
Illustration by Tricia Lee
Suddenly, Abby stopped tapping her paw on the console. She looked at me and said "I don't think they were burned up here. Whatever that retrofire was made of, it flung everybun away somewhere."
I think the stress was starting to get to her.
Credits:
- Renee: taking care of critters, photography
- Mr. Bun, Ijon Thichy The Nth: story
- Mrs. Angie: editing

I had a depressing day and I really wish I could smush my head into that bunny cuddle it the fist photo? Do you think they'd approve?

I meant "first" photo of course, not "fist" photo--that would be in cases of extreme disapproval.
Also forgot to say I love the Mister Toes illustration. I can picture him in the stars beyond the rainbow bridge.