The Disapprovers - Not So Silly Putty 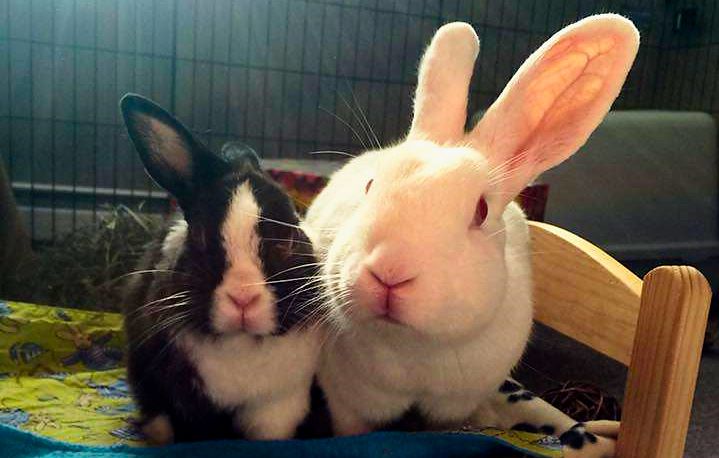 Last Week on the Disapprovers: Mr. Toes, Molly and Zeus enter the mystery object found at the deep end of the artery. They quickly explore and traverse it to what they consider its endpoint. There, they come in contact with a strange substance and Mr. Toes is tempted to enter it.
Strangely enough, I felt very safe. Among the watch crew, a heated discussion broke out. Abby wanted us to gather up whatever samples we could and to return. Suzy wanted to wait. She calculated that we had another couple of hours before we would have to start working our way to the top. We were all fascinated by the wall of goop in front of us. The both tried to touch it and put their paws in it. I stepped up to it again and swiped my paw through it and I felt my paw slide across something. I jumped back and started thumping. Old instincts took over before I could blink. Everybunny else took a step back too. Aren't we supposed to have rayguns or something for moments like these? Zeus had a screwdriver; I think. I sure could use a raspberrini. 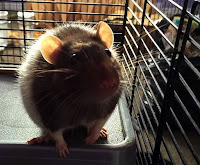 Zeus
Everybun got quiet. We watched as a small nose emerged from the substance, then eyes and ears, followed by a careful step of a small, fuzzy foot. A young and frightened raccoon came out. It was hard to tell who was more relieved. The raccoon feller moved forward, never taking his eyes off of us. He paused and asked, "What time is it?"
"Half past noon." said Zeus.
The raccoon started trotting into the pipe, stopped suddenly, looked back at us and asked "Is it still Wednesday?"
"All day today." answered Molly.
He said "Thanks!", smiled and quickly moved on. 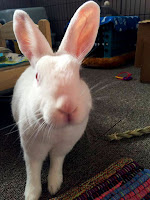 Abby
"What in hay was that all about?!?" asked Suzy.
"We'll let you know as soon as we find out." responded Molly, drawing out her words.
Zeus grimaced, tilted his head and said, "... hm, at least it's safe."
"Sure it is!", jabbed Abby with sarcasm.
"I want to find out for myself." I stated matter-of-factly. I knew what every bunny was thinking. They were afraid and curious at the same time. Afraid to go in and hesitant to retreat. 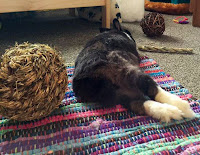 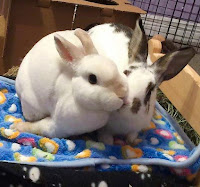 Molly and Suzy
"Tether, Zeus, put a tether on me; give me 3 minutes in there and pull me out if you don't see me coming out. Is everybunny ok with that?" I asked.
"Rope him good!" said Suzy.
We all checked and coordinated our watches. Molly did the tethering honors. Zeus double checked how it was tied to the back of my vest. We got our stop watches ready. I felt just like before stepping out of a perfectly good airplane, wondering which part within me made me go through the motions of getting in the door and pushing off into the open space. How did the other parts get suspended, becoming passive observers? There's nothing heroic about it, it's only been fascinating me to no end and it remains a mystery.
I gave the count, "Ready, set, go!" and went in. 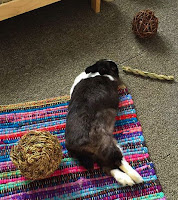 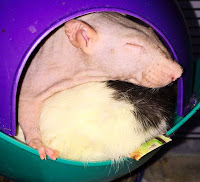 Freddie
It was blackness and darkness like I've never seen before and for a second I thought I went blind. I heard some bunstronauts talk about how dark the outer space is and guessed this had to be close. I couldn't tell what was going on. I tried to move my paws, but I couldn't get any traction, I felt weightless and suspended. There was no sensation of falling though. My gut started feeling a little queasy, vertigo didn't help either. My temperature and heartbeat went up and if I managed not to get a heart attack, Frankie would, when he saw my telemetry. Were they still getting my telemetry? I was breathing. At least I was breathing. I could feel my vest still on me. I attempted to reach the tether on my back to give it 3 yanks. No joy. I knew I was close to it, but I just couldn't reach it. I felt for my watch and pressed the illuminating button. The green glow of the dial showed only a second had passed. Did my watch go out?!? 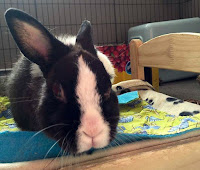 Mr. Toes
I tried to transmit, "Zeus, anybunny, radio check!", but I couldn't even hear my own voice. No bun responded. I checked my watch again, it had to be stuck, the count hasn't changed! Worse, when I pointed the light around, it didn't illuminate anything. Nothing at all. I reached for my little torch and turned it on. Same thing, the beam of light caught nothing, no matter where I pointed it. It didn't even catch any part of me. How could I hold the flashlight, point it at myself and still see nothing? Not even myself?
I turned the torch off and carefully stowed it on my vest, not even sure why. My paws were shaking. I held my breath for a while. Exhaled slowly and deeply. I forced my eyelids shut and repeated the breath cycle several times. The only light I could perceive was an imagined one. I concentrated on a memory of Molly and Zeus from a short while ago. Then the image of Abby came to semi focus. I took another slow breath.
Credits:
- Renee: taking care of critters, photography
- Mr. Bun, Ijon Thichy The Nth: story
- Mrs. Angie: editing

Did Mr. Toes enter a black hole?? Or perhaps a sensory deprivation chamber?? Oh, dear, oh, dear! I hope that tether is on tight, and the other buns and ratty friends yank him out soon! And hopefully they have some calming carrot nibbles at the ready as well...
-Jen (Kohl's mom)

.... See you next week folks! We'll find out more about this new and strange development! Be sure to ask your Mom for 25 cents to get into the show and buy a drink.

I didn't realize what a wee bun Mr. Toes is! Only obvious next to his friends.