The Disapprovers - Head Over Wheels

At first, Zeus could only hear the gentle footsteps crushing frosted leaves. He slowly lowered his night vision goggles. Milly sensed something she could not and had no time to articulate. Then she screamed "Run!"
Milly and Zeus darted back into the burrow and raced toward the artery. She later told us the gentle leave rustling turned into dull, soft, rapid thumps. Like Bruno galloping , except heavier and more intense by an order of magnitude. The lynx stuck his head in the burrow, but that's as far as he got.

Mr. Toes
Milly and Zeus made it to the artery and got inside. They were safe now, but their bodies would take a while to believe that.
"Now I know what you mean by 'just in case', Zeus." said Milly gasping,
"I thought you were just a little nuts working out on the tread wheel."
"I know." said Zeus hyperventilating.
They moved the steering units on their roll boards to the opposite ends and Zeus radioed "Toes, how about we come over and see what you've got?"
I said "Good idea! No monster cats here. I have to say, we have not observed any subterranean crocodiles either, so it might be boring."
"Right now I like boring!" said Zeus and they sped off to see us.
We went back to staring at this drain, or pipe or whatever it was. Trouble was, from our position, it was difficult to recognize what, if anything, was going on on the surface of this pipe. Imagine looking down a deep, narrow well, at night. Even night vision didn't help much.
"Frankie, is there any history of mining or prospecting around here?" I asked.
"Some in this region, but not a lot and not around here. Izzie is looking into this." said Frankie.
"What about military fortifications or installations? How far back can you check the history of civil infrastructure development around here?" asked Molly.
"Nothing old so far, only fairly recent development." said Izzie. In the background we heard the muffled sounds of somebunny frantically working a keyboard. 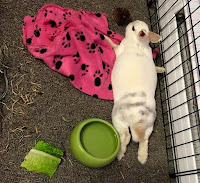 Suzy
When Zeus and Mila were passing by our original entry point into the artery, Mila got out and joined the watch crew. Zeus took her roll board and proceeded to meet us. Shortly after, he was at our end, a spare roll board in tow. I liked his thinking.
We managed to improvise an autonomous rover from the roll board. We rigged up couple of body cameras to give it "eyes", set of night vision goggles, mounted couple of flashlights and we got it into the "pipe". It got a little heavy and we struggled to get it through the opening. Finally, when it started rolling, we noticed that the surface was not puffy or soft at all. It was firm and solid, and rover's wheels weren't sinking or getting stuck. We glued our eyes to the video stream and Zeus concentrated on controlling the rover. Now the irregularities on the "sides" of the pipe made more sense. They were entry ways or something. Some were round, some resembled the shape of an egg with a flattened top and bottom. We started to worry that we might lose our rover to one them. 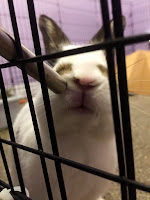 Molly
Sure enough, it went in. It moved a little too fast and even though Zeus tried to put the motors into reverse, it was too late. The rover slid in and got hung up on its rear wheels while the front ones hit and rested on something. The cameras were aimed at the sides of the pipe and we didn't pay any attention to what was right in front of it. We could see the beam of light glowing from the opening, about 30 or 40 feet away.
The rover continued to stream the video. One camera, pointed down, showed the bottom of the cavity, partially filled with something smooth and solid. The other one, pointed a little bit up, showed a tangle of semi melted pipes, or stuff that looked like scrap metal. Imagine a garage full of industrial equipment or a workshop of a mad metalworker that someone tried to melt and only partially succeeded. 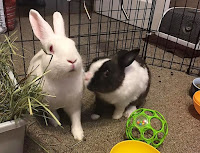 Mr. Toes and Abby
Zeus looked at us and said slowly, "I think we need to fish out our little friend, you wouldn't leave him like this, would you?"
"Of course not, but I thought the rover was a 'she'." said Molly.
"That's what I meant! How about I go first and 'just in case', you hold onto me. I'm not planning to slip or anything, but you never know." said Zeus as he started to make a tether. 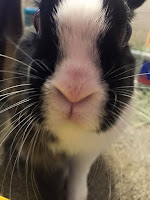 Mr. Toes
At that moment I felt a squeeze in my gizzard. Yeah, a gizzard, because down here you need a gizzard. A fluffy belleh ain't gonna cut it! You snack on bearing balls and fart out rivets!
Credits:
- Renee: taking care of critters, photography
- Mr. Bun, Ijon Thichy The Nth: story
- Mrs. Angie: editing

I need a program. I can't tell the plot or the characters without a program. Some popcorn and big soft drink will help too. Oh - and a Snickers.