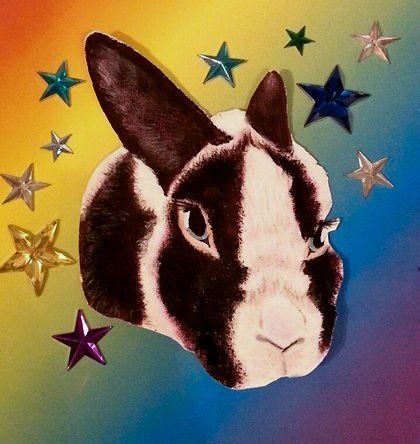 Mr. Toes by Tricia Lee
I felt nauseous for a second as something funny happened in my gut and I swear that my heart skipped a beat; at the same time, all the lights flickered. Maybe this morning I overdid it with the raspberry pie "That's OK," I thought, "in a few hours I'd be back home and on vacation with Abby. We will be going on a berry tasting tour in the northeast." The only trouble was, the radio was dead. 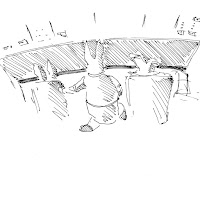 Hopper, Mr. Toes and Mel
by Ijon
I had two young guys sitting up front. Hopper, an orange Rex, and Mel, a feisty little Dutchie, both freshly minted bunstronauts. This was their first real assignment, a test flight of an old tug boat that just came out of maintenance after a major overhaul.
I thought, "Maybe the maintenance buns need to better check their maintenance?" It's never a good thing when your radio goes out.
"Hopper, cycle the communications module, please!" I yelled out. Intercom was dead too. Mel grabbed the checklist and helped Hopper go through the procedure. Intercom came back online. "Comm cycle complete." called out Hopper.
"Major, we're still not picking up the Flight Center." said Mel, sounding a little nasal, very laid back and matter of fact.
Then we noticed another curious thing. The guidance computer lost its sense of place in the universe. "Maybe this tub should have been scrapped?" I thought.
"Hopper, do you see what I see?" I asked as I unbuckled and floated upfront stopping between Hopper and Mel.
"What do you make of that error message?" I asked them. Hopper tried to refresh the location cache, but that didn't help. We were not picking up any satellites that could help us establish our position. We saw no satellites in the system at all. Well, that had to be pure rubbish. Whoever signed off on this tug as service ready will be baling hay.
There was one last thing we could try.
"Hopper, astro verify our position, please," I said. Hopper had the ship look at the planets and stars to determine our position. The computer finally gave us coordinates, showed our position on the digital eight ball, and gave us another warning: "Position unreliable, unable to verify data." 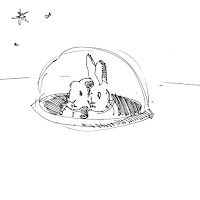 Hopper and Mel
by Ijon
My gut sunk a little more. So far we did everything by the book, and I wasn't very worried. Now I had the sense that we were running out of pages to go by in that book.
We were staring in silence at the terminal as Hopper displayed raw computer logs looking for errors and warnings. After a few moments, the mystery and trouble deepened. The computer couldn't reliably identify any of the celestial bodies it was observing. The stars and planets looked misaligned, and the planet below us spun a little bit too fast. We would later discover that the lookup tables with the positions of stars and planet didn't hold any historical data. The Computer knew where the selectional bodies should be in the future, but it didn't know where they were in the past. Not as far back as we needed it to, turns out. It guessed where we were.
All three of us floated toward the windows. We were on the dark side of a planet, and the sunrise was a few minutes away. Below us, we saw no city lights. The surface appeared to be very bright, and we thought it must be heavy cloud coverage, reflecting the ambient light of the moon and the stars. There was lots of it. We watched and waited. After the sunrise, things got worse. Yes, there was some cloud coverage, but most of what we saw was snow and ice. That place down below us was going through some sort of severe winter.
Next, we deployed observation bubbles from the hull of the ship. At least we could look around while we tried to figure out what to do next. Hopper and Mel stayed put observing the surface of the planet, and I went to gaze at space. I said, "Guys, keep looking for anything green down there, when we enter the dark side again, keep looking for any lights at all. Titov said he could spot campfires from orbit."
"Will do, Major." said Mel.

Mel, Hopper and Mr. Toes
by Ijon
I worked my way to the bubble and crawled into it. Usually, this view always takes my breath away, and I never tire of it. Now I wondered if I was looking out from my coffin. At first glance everything still looked familiar, it was the same view I saw countless times before. If things have shifted out there, I couldn't tell by how much. Holding on to a paw rail, I slowly turned around. That's when my heart skipped another beat.
"Mel, Hopper, you better get over here!"
They got there in a hurry. I got out of the bubble, and somehow, they both managed to squeeze in there. Hopper got out of it almost immediately. He turned off life support in his suit and pulled down the visor on his helmet. His breathing was fast and heavy; his visor started to steam up. When he got done hyperventilating, he opened the visor and just kept looking at me without saying a word. Then Mel turned upside down and stuck his head out of the bubble. His nose was twitching fast; he looked perplexed.
"How did we miss it on the radar? " asked Mel and turned himself around once again and disappeared in the observation bubble.
Today we feature the disappearance of Mr. Toes and his young crew from their perspective. We are starring two fictitious characters: Hopper and Mel. They are named after two American painters: Edward Hopper and Mel Leipzig. Mel is a contemporary American realist painter and Hopper is one of his favorite artists.
Of course, it's plausible. Just consider Alan Bean, one of the Apollo astronauts who painted before he flew to the moon and after retiring from NASA became a full-time artist. Alexey Leonov, the first spacewalker, doesn't shy away from the brush either.
Credits:
- Renee: taking care of critters, photography
- Mr. Bun, Ijon Thichy The Nth: story
- Mrs. Angie: editing

Buns In Space.... que the dramatic music. Those pencil drawings depicting the action are great ! ken&Kaci