Abby and I were in the middle of a checkers game when all the alarms went off and the ship sounded collision. Abby pushed off immediately to suit up while I sealed off and secured our cabin. Until we heard the "all clear" signal, we would continue to prepare. The moment I got to my locker we felt the collision. Something had thumped the Buzzard, and we felt and heard a dull clang as it echoed through the ship. I paused. Abby carried on with her suit and looked at me with scorn. I floated to the communications terminal and pulled up the status report of our craft. As I suspected, something had done a hard dock with us. It was Freddie and his trawler, the Morsel. 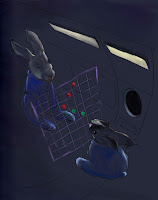 Abby and Mr. Toes
I called the flight deck and asked: "Did we have a collision or did Freddie dock extra hard?"
"It was Freddie. Stand by, we'll sound all clear as soon as the auto scans are complete," answered Molly, sounding peeved. Even if the ship turned out OK, there would be a lot of paperwork to do.
After a short while, Molly downgraded the emergency to a "caution" level, so Abby and I went back to our checkers game. Out of curiosity, we connected to Freddie's flight deck and asked him about what had happened. At first, we suspected it was one of Freddie's practical jokes. We found out later that some control thrusters had misfired on the Morsel. Freddie wasn't too happy about that. In the end, it meant a weekend of filing reports and other nonsense. 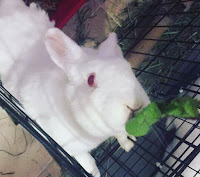 Abby
Once the situation was under control, we gathered for dinner and got down to business. Yes, business, because, magically, Freddie had procured a substantial quantity of fresh carrot tops and nutriberries. He said he had a lot more of that stuff on board the Morsel, but it would cost us.
He wanted all the x-ray machines from our last salvage job. 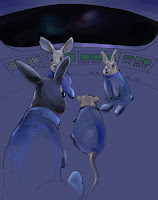 Dinner with Freddie
We sampled the offerings. Pancake and Abby had seconds or thirds. Freddie felt really bad about that hard dock and did everything he could to ease the tensions. He even vacuumed all the little bits and pieces of carrot tops floating about the room. The last thing we wanted was clogged up air filters. He knew Ava would scorn him into changing them. Yes, Ava's stare down looks had almost magical powers, and Freddie knew better than to test them.
When Abby had enough, she planted her feet into foot restraints and folded her paws across her chest. Her eyebrows took on a quizzical look of curiosity and disbelief. After a moment of contemplative silence, she asked, "And what exactly do you plan on doing with those machines? And how did you know we even had them?"
Freddie, apprehensive and intimidated, cleared his throat and looked around the room uneasily.
"You see, I have this old barge, parked in a geostationary orbit, behind the dark side of the moon. I'm assembling a sort of a radio station from those machines. I think it's rather unfortunate that we only have radio telescopes 'listening' for x-ray signals. Wouldn't it be great for a change to transmit something on the x-ray frequencies?" 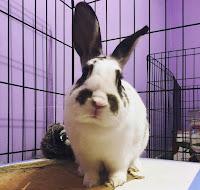 Molly
"You what again?" asked Molly, trying to ascertain that all the words she just heard meant what she thought they meant.
"OK, I'm blasting music out into space with the help of old x-ray machines. I have an array of them going, and I keep adding to it. So I could really use the units you've got. You know, you listed them in the salvage manifest. Give me your playlist, and I'll play in on the array next week. 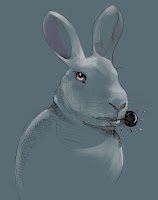 Abby and the berry
Molly cracked up and asked, "And how are you powering, that, you know, whatever you call it?"
"Plutonium; don't ask." said Freddie.
"You should try disdanium; twice as vicious!" quipped Pancake. Joey, floating in the back looked puzzled, unsure why they girls were picking on Freddie. At this point, I didn't get why they were picking on him so badly either. Were they still upset about the dock? Was it Freddie flaunting his creative tendencies and thinking outside the airlock that had them so irate?
I was still nomming the nutriberries and couldn't swallow them fast enough. Finally, with my mouf only half full, I slobbered out trying to change the subject, "Good berries, delicious berries, Freddie. Definitely worth a couple of old machines. So, where did you get those berries?" Freddie grinned at me a that's all he would give up. 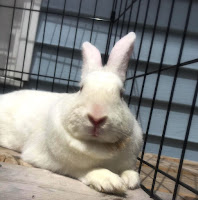 Joey
After the last swallow, I wiped my mouf with the sleeve of my suit, like a space peasant. I asked, "How about a live performance? You know, you could hook a small orchestra to it or something. I would buy some tickets." Abby gave me a sideway look, but I only tossed one of those berries her way. She caught it in her mouf and chomped on it way harder than necessary. The berry gave up its juice with a pop, and tiny, sweet droplets flew in all directions. Anxious, Freddie blinked as Abby bared her teeth at him for a split second.
"But you're doing all the paperwork, even ours!" snapped Abby as she turned around and floated toward the flight deck. 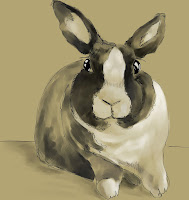 Mr. Toes
I said, "OK, Freddie, she doesn't like paperwork. Let's go and see what's in the cargo bay." I floated toward Freddie and clutched him in a bear hug. Off we went down the tunnel toward the cargo airlock.
Credits:
- Renee: taking care of critters, photography
- Mr. Bun, Ijon Thichy The Nth: story
- Mrs. Angie: editing

Follow the Characters of X Plus Bun on FB
On Instagram @dollyalittledisabledrabbit
Visit our About X Plus Bun page to learn more about the cast members and catch up on other stories!
Posted by Mister Bun at 1:09 PM