Last Week on the Disapprovers: In the final push to get ready for the bust, the crew goes through a rescue exercise. They refine the steps and equipment required for getting a bunn from its cage. They lose Mila, a great, ratty friend and crew member.
During the nights, the ratties began disappearing, to gather supplies. We decided to use the wreckage as a temporary shelter and Zeus worked hard to fill up our temporary pantry there. He put out a call to all his friends for leads on any bunn and ratty supplies, like hay, pellets, ratty food, neem shampoo, pee pads, litter bedding, even Critical Care and SARx, if any could be had. 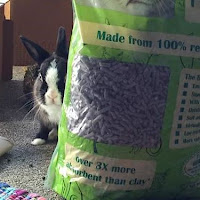 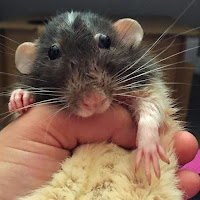 Frankie
He had buddies working in different fulfillment warehouses, and a lot of that stuff was being thrown out. How come? Lazy hoomins, mostly. When packages were returned and deemed "damaged", they would throw them out, rather than re-stock them.
We decided to pair up in the following way: Abby with Izzy, Pancake with Zeus, Molly with Freddie and Me with Frankie. Bruno would help whoever needed an extra paw. We would need every paw on deck, when that night came.
Zeus managed to negotiate the timing of the raid on the lab by the feds. They refused to shut down the entire operation just yet, including the offshore pyramid scheme, but they did agree to close down the lab and lock up the "doctor." They needed access to the Foreign Prime Minister, because he was still leaking certain valuable information of a military-industrial nature. 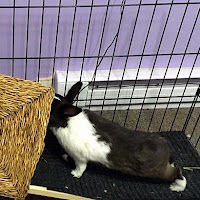 Mr. Toes
Zeus was unhappy that the missus would not be going to the federal pokey the same day as our "doctor," but Abby noted correctly: we still held all the cards. Our opponents didn't agree to our terms until the very last minute. I think they were doing their best to fold our operation and couldn't, so we still had the upper paw. I was surprised how composed Zeus remained throughout all this. I missed "Zeus the Hothead". He was all business now. I thought about riling him up over something just for the hay of it, but Abby said I'd better behave. She was right.
We were keeping a very close eye on the lab for any changes to how many critters there were and everything else that could affect the bust, for example, a change in the arrangement of the room or replacement of cages. We tried to watch the rescue sites as well; that was hard to keep up with because there were so many of them. We did the best we could, and we kept a rotating schedule for spot checking them.
Izzy made a dapper suit for Pancake, and we had a little party for her. How come we didn't party when we got our suits? Anyway, she was excited and embarrassed by all the attention we were bestowing on her. Zeus said she had helped him with the pneumatic, steampunk blow pipe and now we had two of these for the ratties. They had made a special, bigger, three-barrel one for Bruno. Bruno promptly christened it the Panzer-Darter. It was a thing of beauty, guaranteed to penetrate the thickest of numbskulls and inject the Awful Truth Serum directly into the corpus-idiotum. 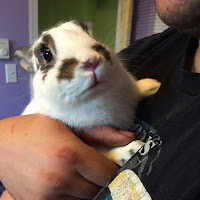 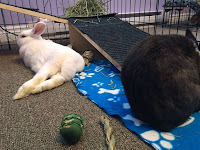 Abby & Mr. Toes
Zeus said the tiny pipefitting Pancake did for it was aerospace quality work. Aerospace quality? "What does that mean?" I asked him. He didn't answer. I ran my paw over the smooth brass piping. The solder was seamless and silky smooth. He even let us do some target darting, just in case any of us had to use one of these. I loved it. The pipe was almost silent, and its recoil was negligible.
A few days before the B-Day (the day of the bust), we stopped everything and concentrated on getting as much rest as we could. Sleep had been scarce lately, so I welcomed the break. Zeus had the pantry full. Barring any last second surprises, we were ready to go. I only hoped none of us would get sick. Zeus informed our sysadmin "friend" about when the security system needed to be turned off, and reminded him of what goes into a prison meatloaf.
As we caught up on sleep, I was able to enjoy a snurgle time with our hoomins. I always liked the head rubs. I tried to climb on them every chance I got, and lost track of how often I chinned them, or took a nap in their lap. I would chin them every chance I got, so they would never forget who owned them. 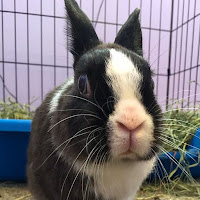 Mr. Toes
One day, we had a scare. Molly started to feel a little sick. Hoomins fed her special food and medicine. They packed her up and ran off to the vet. We were devastated. When they came back, and she could eat again, I felt like we all got a second lease on life.
With my mind somewhat at ease, I looked forward to a few more days of rest and a couple of nights of good sleep. I stretched out on my pad, closed my eyes and tried to pay attention to how soft the pad was, including the fact that I did not have to do anything that night, or the next day. I found myself snoozing with my eyes half-open in the tall, fresh, wild grass, next to a river, under a canopy of trees, on a hot summer afternoon. There was this blue and orange butterfly that tried to land on my nose, and I tried to shoosh it away with my whiskers, but it wouldn't leave me. Then it started bouncing on my head, harder and harder. What sort of butterfly was it? Then it was outright poking me in the head. Molly's paw, that's the butterfly that was poking me. My eyelids knew they should open, but the sandpaper between them and the eyeballs would have none of that. "Get up, Major, get up and suit up now!" whispered Molly, sounding extremely non-negotiable.
Credits:
- Renee: taking care of critters, photography
- Mr. Bun, Ijon Thichy The Nth: story
- Mrs. Angie: editing

This rescue mission will be truly epic! The 'extremely non-negotiable' phrase got me wondering, do bunnies disapprove of other bunnies? Do they have disapproval matches with like, a point system and referees and everything?
-Jen (Kohl's mom)